Air Fried Chicken Parm with Zoodles – Life Above the Cafe

A new noodle and a lighter restaurant style meal! 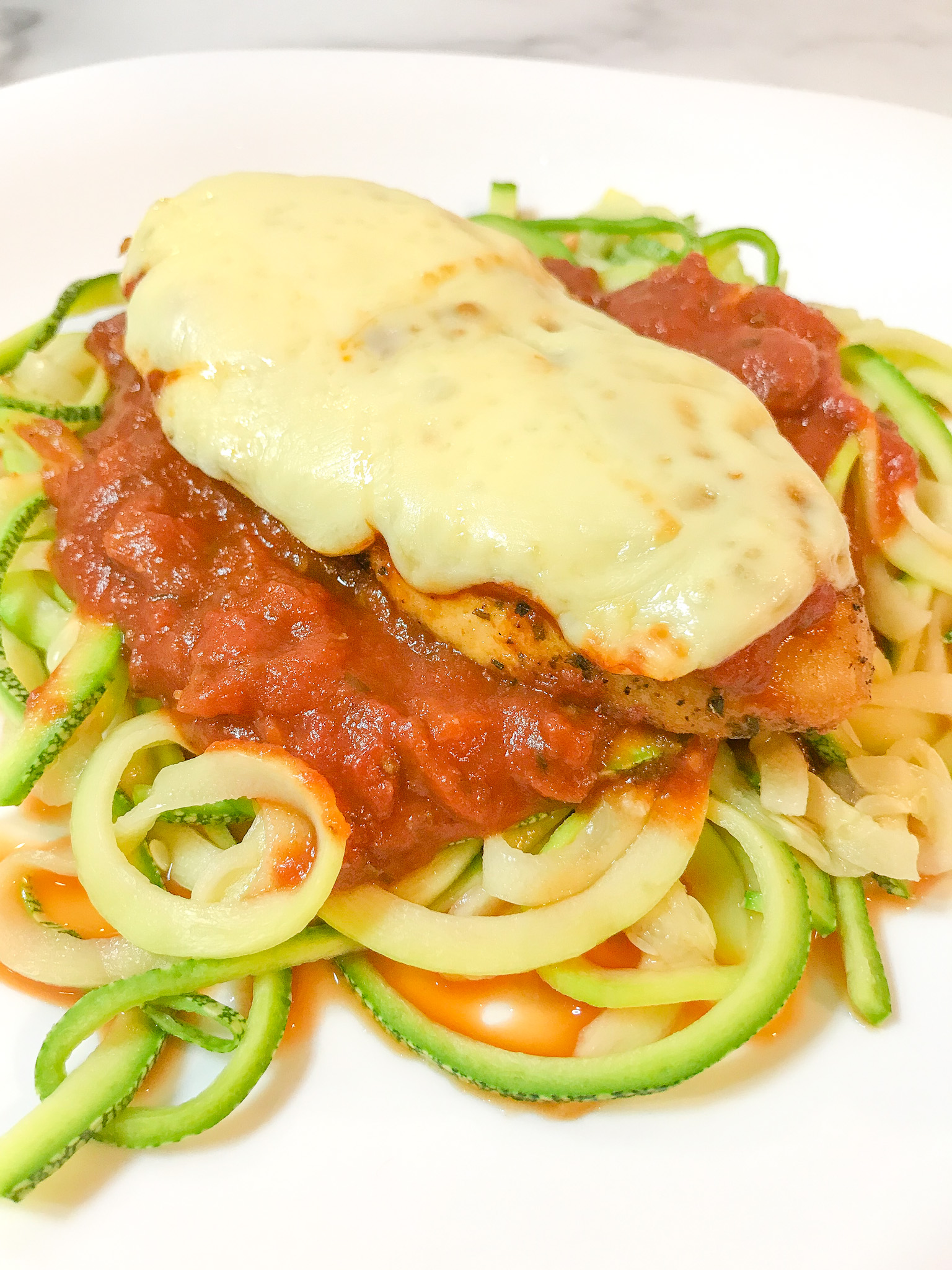 I am a big fan of Italian style meals and this Air Fried Chicken Parm with Zoodles (zucchini noodles) is no exception. It’s a lighter spin on a classic meal, which is exactly what we need in our house after a year’s worth of quarantine eating.

I used my air fryer and a cooking spray to cook the chicken breasts, but if you don’t own an air fryer, a non stick skillet is a great alternative. I don’t cook with a lot of oil so I would suggest adding a couple of teaspoons of oil to the hot skillet at first, and then adding more oil if needed to the pan when you flip the chicken to cook the other side.

Use thin chicken breasts, or chicken tenders if you prefer. Since I didn’t want leftovers of this meal, and there are only two of us in the house right now, I cut one large chicken breast in half to make two thin chicken breast. This recipe is easily doubled or made larger if you’re serving a crowd.

My noodle maker came with a mandolin that I gifted myself for Christmas. This is the first, but definitely not the last recipe that I will be using it for. If you don’t have a noodle maker, many grocery stores sell Zucchini noodles in the freezer section ready to go. Likewise, you can cut long, thin 1/4 inch strips the length of the zucchini, in place of using a noodle maker. I bought a large zucchini and it was perfect for splitting up between two people.

Zucchini noodles cook quickly. I boiled my zoodles for two minutes so that they wouldn’t be mushy. If you prefer, saute the noodles in a little oil or add them directly to your warmed pasta sauce for a couple of minutes instead of boiling them.

Use your favorite jarred pasta sauce or homemade if you prefer. Since the zucchini is mostly made up of water, I prefer a thick and chunky garden style pasta sauce so that it doesn’t become too thin once added to the cooked and drained zoodles.

This recipe feeds 2 people, but is easily adjusted to a family of 4 or larger.  I only used 1/2 of a jar of pasta sauce, so don’t buy 2 jars if doubling the recipe.

If boiling the zucchini noodles, place a pan of salted water on the stove on high to come to a boil.  Cut the zucchini into ribbons using a noodle maker, or cut long thin strips 1/4 inch wide and the length of the zucchini.

Slice the mozzarella cheese and prep the chicken by cutting the large chicken breast in half so that you have two identical thin pieces (use 2 to 3 chicken tenders per person if desired for even faster prep time).  Sprinkle the seasonings over both sides of the chicken, and spray each side with cooking spray.

Preheat the air fryer to 390 degrees Fahrenheit.  Warm the pasta sauce over medium low heat (cover the pot and stir the sauce often to avoid splattering and scorching).

Once the air fryer is heated up cook the chicken breasts for 5 minutes, and then flip the chicken and cook for an additional 5 minutes.  Although my chicken was cooked through to 160 degrees F at the 10 minute mark, check yours with a thermometer.   Add a layer of pasta sauce and two slices of cheese or enough to cover each chicken breast and cook for 2 to 3 more minutes or until the cheese is melted and bubbly.

I started cooking my zucchini noodles in the salted boiling water towards the end of the chicken’s cooking time so that everything would be finished up around the same time.  Drain your noodles after cooking them for about 2 minutes.  They will become mushy quickly so don’t over cook the zoodles.  Drain them well in a colander so they don’t hold too much water.

Plate the zucchini noodles, add a layer of warm pasta sauce, and a piece of the Chicken Parm on top.

If you prefer to cook the chicken in a nonstick skillet, add a couple of teaspoons of oil and cook the chicken until cooked through.  Add the sauce, the cheese, a Tablespoon of water, and cover the skillet with a lid to help melt the cheese.