A dessert that will surely be the envy of the dessert table! 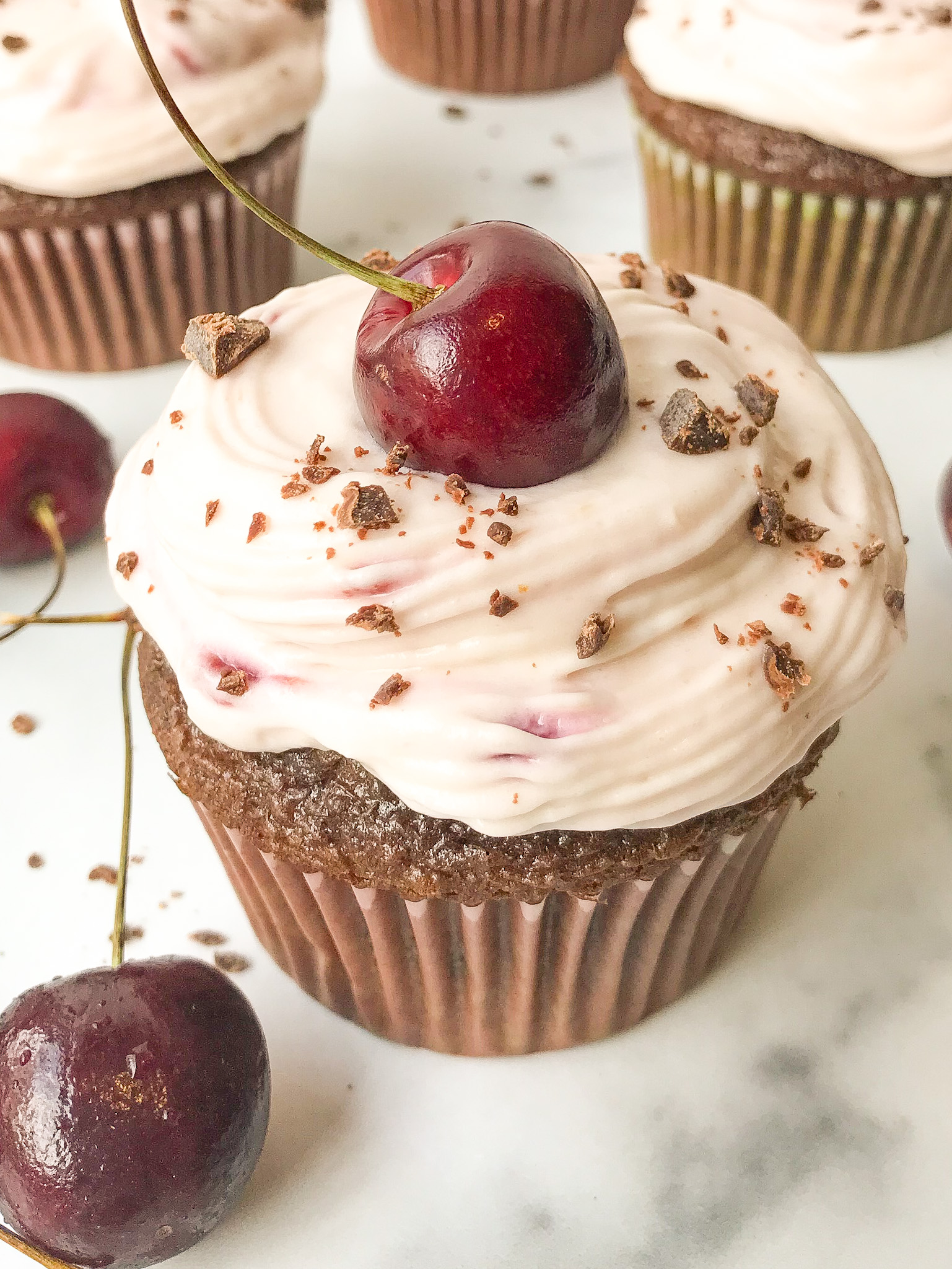 I’m not a big fan of chocolate, but my family loves any chocolate dessert that I’m willing to make. These Black Forest Cupcakes were made because my husband loves chocolate and fruit combinations.

For this Black Forest Cupcakes recipe I made stable whipped cream frosting. This is easily achieved by using jello vanilla pudding. If you don’t like using jello products then I suggest topping these cupcakes with a different type of frosting that is naturally thicker like cream cheese or butter cream frosting. I add a little cherry compote to the frosting so it needs to be stable enough to hold up to the addition of fruit. If you don’t stabilize the whipped cream and then add the fruit it will cause the frosting to thin out to much.

Speaking of cherry compote, for a faster way to achieve the pink frosting and cherry flavor you can use cherry jelly or cherry pie filling. I piped my frosting using a decorative tip so if you plan to do the same for your Black Forest Cupcakes, I suggest chopping the canned cherries up finely so the tip doesn’t clog.

I made 24 Black Forest Cupcakes, but I only frosted half of them the day that I made them and stored the remaining frosting in the refrigerator for the next batch. If you plan to frost all 24 and you like a lot of frosting on cupcakes then this recipe may not make enough frosting, but it’s easy to whip up a little more since you won’t use all of the cherry compote. I had enough for our cupcakes, but I don’t use a lot of frosting. These Black Forest Cupcakes should be stored in the refrigerator.

For the cherry compote

Mix and bake the cake mix according to the manufacturers instructions.  Bake in cupcake liners.  Set aside to cool.

If using, make the cherry compote while the cake bakes by putting the pitted cherries in a pan with a teaspoon of sugar and baking over low heat until thickened, about 5 -6 minutes.  If you prefer skip this step and use either cherry jelly or a little cherry pie filling but chop up any large cherries.

For the cherry compote, it needs to be pretty smooth if you plan to pipe the frosting since the cherries will cause the piping tip to clog.  To do that I chop my pitted cherries up very finely and I smash them as they cook.  Also, use a piping tip with a hollow opening that isn’t obstructed like a star tip would be so any cherry pieces won’t get stuck.

For the frosting, mix the whipping cream, powdered sugar, and vanilla pudding powder in a large mixing bowl with a whisk attachment until stiff peaks form, about 5 minutes.  I added in a Tbsp. of the compote at a time, and stirred it in after the frosting was whipped so that I didn’t cause the frosting to become runny.  I mostly wanted it for the color and a bit of the flavor.  If your frosting becomes too thin add a little more powdered sugar to thicken it up.

If you would like to add more flavor and a center element to the cake, make more cherry compote that is a little thinner so it has more sauce or use canned cherry pie filling to fill the center of the cupcakes.  After the cupcakes cool, cut a small amount of cake away from the center and fill with a small amount of the cherry pie filling.  If possible I like to replace a little of the cut away piece of the cupcake as a topper and then I frost it.

Once the cupcakes are cool frost them with an offset spatula or by using a piping bag.  I chopped up a handful of chocolate chips to sprinkle on top of the cupcakes and then I topped the cupcakes with a cherry to give them a decorative element.