Chicken & Dumplings – Life Above the Cafe

A heater in a bowl on a snowy day! 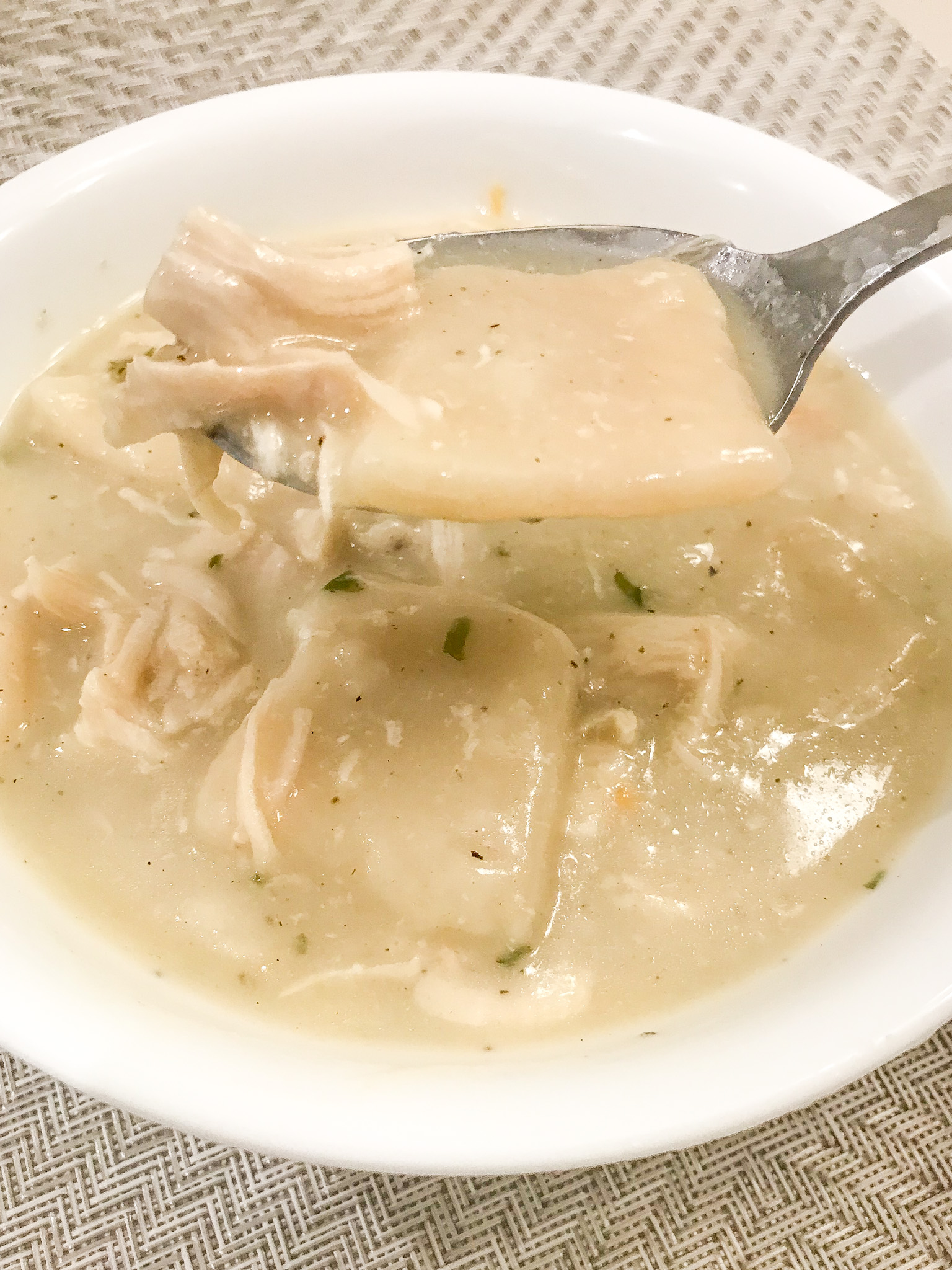 Before I ever tasted a Cracker Barrel Chicken and Dumpling I had grown up enjoying plenty of bowls of steaming hot Chicken and Dumplings. My mom usually wore the crown of chicken and dumplings queen. The only time that one of the jewels fell out or it got a little tarnished was when I found a piece of chicken cartilage or a small bone in my mouth. Blah!! It was always in my bowl. No. One. Else’s. Other than those rare spoonful’s of weirdness I happily ate a giant bowl or two of her chicken and dumplings.

Then once upon a time, I met Cracker Barrel’s Chicken and Dumplings. They were salty goodness on a plate. The decision was at hand. Did I prefer driving to a restaurant to eat a pile of dumplings covered in a delicious gravy with delicate chicken tenders mixed throughout or did I stay true to my mom’s soup/stew style? It’s a decision that could never be made. Both are appealing, and have their own unique flavor and attributes.

We live in the south where snow days are rare. When our kids were little, my tradition was to make a pot of Chicken and Dumplings each and every snow day that we were able to enjoy. When the kids would come in from playing in the snow and freezing off their noses, fingers, toes, and buns, I would have a huge pot of chicken and dumplings waiting to warm them up.

To make these a vegetarian option use a vegetable broth base and leave out the chicken. They’re just as filling without the meat. For vegan dumplings use the vegetarian broth to make the dumplings instead of milk. If you’re looking for a faster weeknight meal, use store bought broth and a shredded rotisserie chicken or boil chicken tenders for about 20 minutes in broth since they cook quickly and are exactly what Cracker Barrel uses for its Chicken and Dumplings.

My prep time of 20 minutes doesn’t include the time to boil the chicken breasts because I’ve  included instructions for using store bought broth.  Add more time if you plan to make the homemade chicken broth.

Add the chicken breasts, celery, carrots, onion, bouillon cube, butter, garlic powder, pepper, parsley flakes and 1 tsp. of salt to  a large pot.  Cover with water and bring the liquid up to a boil.  Reduce the heat to low so the liquid stays at a simmer.  Cook for about 45 minutes. Remove the chicken and vegetables from the pot.  Allow the chicken to cool and then shred or cut into bite size pieces.

Note* I have used boneless skinless chicken breasts too and they are fine.  Just make sure your broth is well seasoned (you may want to add another chicken bouillon cube).

I mix, roll, and cut the dumplings while my chicken cooks.

To form the dumplings:

Add 2 cups of flour, 1/2 tsp. of baking soda and salt to a mixing bowl.  Mix the the dry ingredients well so everything is incorporated.  Cut the butter into the flour until it’s in small pieces.  Slowly stir in the milk until the dough forms a sticky shaggy ball (you may not need a full cup of milk).  No flour should be at the bottom of the bowl, but don’t add too much milk to the dough.  *Note – you can also use vegetable broth for the dumplings for a vegetarian option, but you may not need as much salt.

Heavily dust a piece of waxed paper with flour to keep the dough from sticking. Place the dough in the center of the floured waxed paper and flour it.  I fold my dough a couple of times and then pat it down and roll it out with my hand or a floured rolling pin.  Roll the dough to a thickness of 1/8 inch. (I like thinner dumplings).

To Cook the Dumplings:

At this point you can judge the thickness of your broth and decided if you want it thicker like a gravy or like it as a soup.  For a thicker gravy mix 2 Tbsps. of flour or cornstarch with 2 – 3 Tbsp. of water and then add this to the pot of chicken and dumplings. Turn the heat up and stir constantly as the mixture thickens the broth.

I don’t add my diced chicken back to the pot of dumplings so that the chicken doesn’t overcook and become stringy (and because one of my kids only wanted the broth and dumplings).  If you prefer, add the chicken back to the pot before serving, or if you’re like me, allow everyone to scoop out the exact amount of chicken he/she wants and then top it with the broth and dumplings.

Note – If you would like, add a can of cream of chicken soup to the broth before dropping the dumplings in.  You can also add 1/4 – 1/2 cup of milk or half and half towards the end as well if I want a creamy broth.  I usually don’t add the cream of chicken soup, but some people in the South do enjoy adding it to their chicken and dumplings.

If there are leftovers they will be thick the next day. I warm them in a soup pot on the stove and usually add a little water or milk to thin the broth back out because it will thicken even more once refrigerated.  Note – if you feel the broth is too thick at any point during the cooking process add a little broth, water, or even milk to thin it out.