A healthier version of Chile Rellenos. 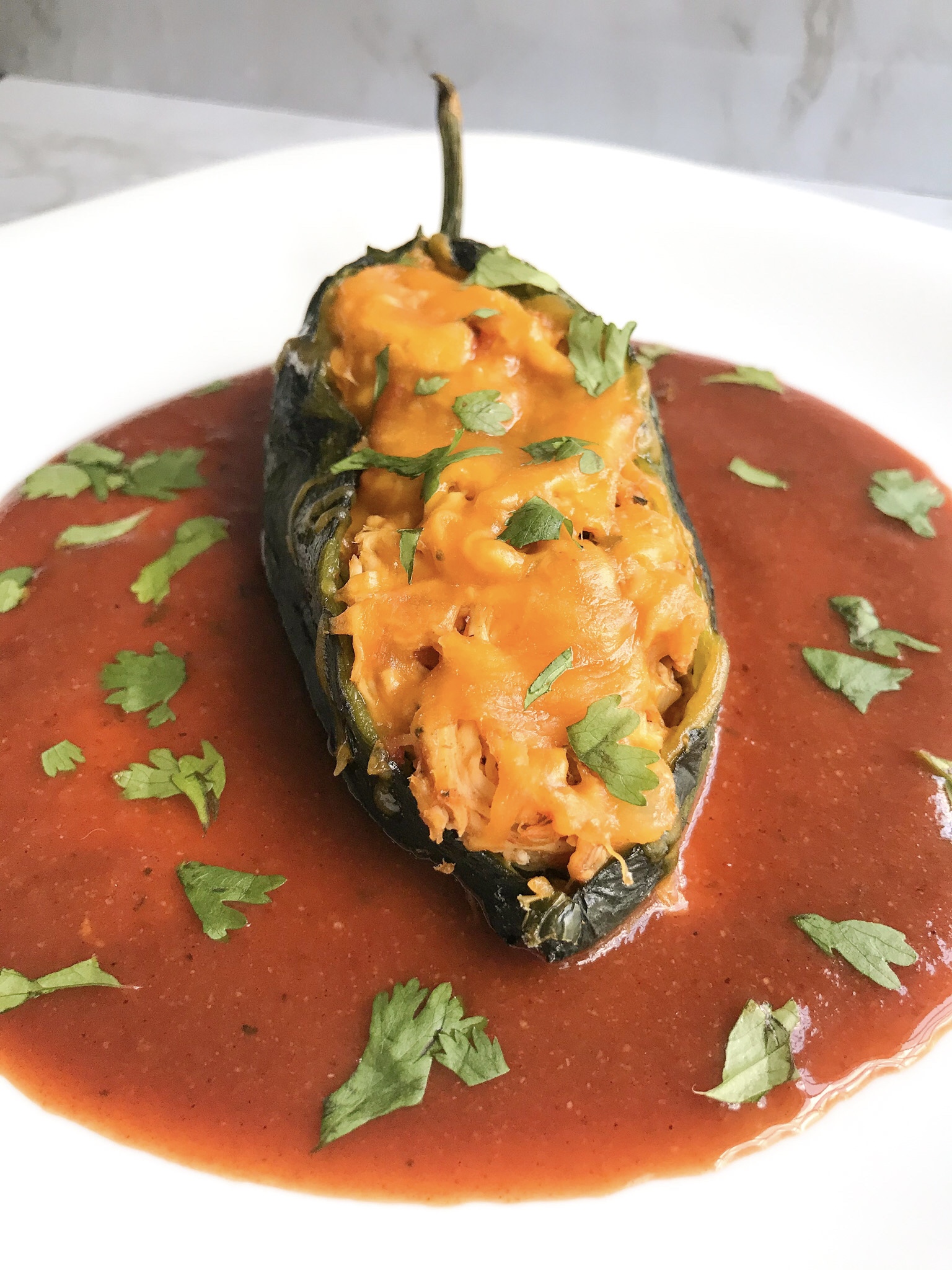 Chile Rellenos are a stuffed poblano pepper, that is filled with cheese and sometimes beef (de carne style), and dipped in an egg batter and shallow pan or deep fried. Relleno is the spanish word for filled or stuffed. These stuffed peppers are amazing in any language!

I used to love the nights that my mother made stuffed bell peppers for dinner. They were few and far between so it was always a memorable meal. They were the closest thing we had growing up to my mom’s usual combination meal order at the local Mexican restaurant which included a Chile Relleno.

I tried a couple of bites of the Chile Rellenos my mom ordered when I was a kid, but never enjoyed them very much because they were usually greasy. I enjoy some fried foods, but never when it’s dripping of the grease it was cooked in.

My local market is constantly stocked with poblano peppers so I decided to give the chile relleno another try. To make a healthier low carb version, I decided to leave the breading and frying out of the equation and to add a homemade enchilada sauce as a base to dip the delicious stuffed pepper. These stuffed poblano peppers turned out so delicious. I’ve made them with ground beef and chicken and we love both options.

To make the peppers less difficult to stuff, since they tear easily, I often roast them, peel them, and split the peppers in half so that they’re easier to clean out. For roasting I use my broiler or you can use your gas burner. I then lay the halves open face style on my sheet pan, and top them with the filling and cheese. They’re delicious and the leftovers, if there are any, are great too!

Line a baking sheet if using the broiler to roast the peppers.  If using a gas burner you will need tongs to hold and flip the peppers.  Roast the peppers on both sides until the skins are charred and bubbly but not burnt to a crisp.  Either wrap the peppers up in the foil, or place them in a bowl with a lid or in a zippered bag to sweat.  I let my peppers sit for 10-15 minutes wrapped in the foil and save the foil to bake them on after they are stuffed.

Peel the charred loose skin from the peppers carefully so that you don’t tear them.  Use a knife to cut an opening in the pepper from the stem to the tip.  Remove the stems carefully to not tear the pepper.  I don’t wear gloves, but I wash my hands well after handling the peppers, if you have sensitive skin you may want to wear gloves.  Poblano peppers are not super spicy but will burn your eyes if you accidentally rub them.  Set the peppers aside and make the filling.

Preheat your oven to 350 degrees Fahrenheit.  I use the same baking sheet and  aluminum foil that I roasted my poblano peppers on,  if it’s not torn, to bake the filled peppers.  Use a fresh sheet of aluminum foil if needed or bake them in a greased casserole dish.

In a non stick skillet over medium high heat, heat the oil and add the onions and saute until translucent, about 2-3 minutes.  Add the tomatoes and saute for 3 minutes or until breaking down.  Add the chicken and season with the spices and then add the enchilada sauce and stir everything together.  Continue to cook until the chicken mixture is warmed through.  Remove the chicken mixture from the heat and stir in 1 cup of shredded cheese.

Split the chicken mixture evenly among the poblano peppers.  Carefully stuff them so as not to burst them.  Lay the peppers on the baking sheet and top them with more shredded cheese.

Bake the peppers for about 15 minutes or until the cheese is melted.

Note* when my peppers tear too much, or to make life easier, I split the peppers in half, clean them out, and then pile the topping on them and serve them with the enchilada sauce drizzled over the top.  It’s not as pretty, but just as delicious!!