A nostalgic dessert that will remind you of childhood! 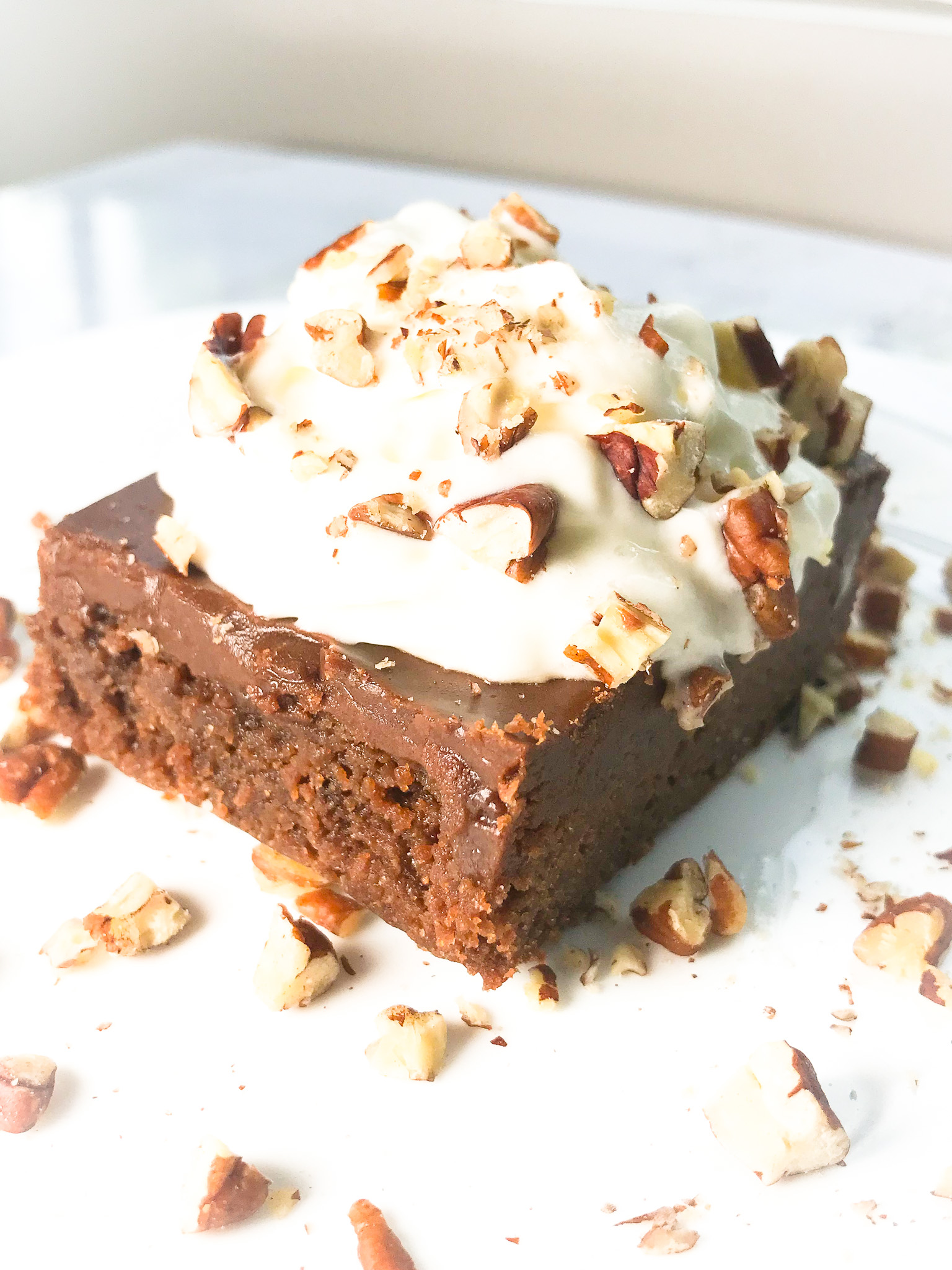 I’ve seen this recipe all over Pinterest from multiple users for years, but I’d never tried to make these brownies because I’m not a huge chocolate fan and my family and I were happy with my recipe for One Pot Brownies. I finally broke down and decided to switch up my brownie routine.

I have to say, what was I thinking ignoring this recipe? These have to be the best brownies that I’ve ever tasted! My husband announced that he hoped that I liked the one brownie that I ate because he would be finishing off the entire pan of brownies all alone.

The reason why these brownies are over the top good is because they’re super fudgy and are covered in a fudge frosting that hardens as it sits. The recipes that I read through all called for 2 cups of sugar in the brownie batter. I cut it down to 1 and 1/2 cups of sugar, but the next time I make these brownies, I am going to try 1 cup of sugar. The frosting is plenty sweet enough so I think that the brownies can handle less sugar.

I added salt to my brownie batter, which isn’t called for in several of the recipes that I read. I feel like salt and chocolate go together and that salt helps to balance the flavor of the chocolate. You don’t notice the salt, but I will continue to add it in the future.

Many people love pecans or walnuts in their brownies, but I don’t, so I left them to the side. I chopped pecans and toasted them so that my husband, who prefers brownies with nuts, can add as many as his heart desires to the whip cream mountain on top of his brownie.

I’m sure that my elementary school lunch room ladies would be proud that I finally made this nostalgic dessert. Don’t be a procrastinator like me, make these brownies ASAP!!

Preheat your oven to 350 degrees Fahrenheit.  Spray a 9×13 baking dish or pan (I used the butter residue left in my empty butter wrappers to grease my glass casserole dish).  If you plan to double this recipe use two pans or one large jelly roll baking sheet.

Melt the butter in a pan over medium heat, once finished, allow it to cool slightly.

Crack the eggs in a separate bowl, and add the vanilla to it, and mix them together very well.

Mix all of the dry ingredients and nuts, if using, together in a mixing bowl so the sugar is well incorporated.

Pour the butter into the bowl of dry ingredients and mix it up slightly.  Next pour in the eggs slowly while stirring so that they do not scramble from the warmth of the butter.

Mix everything together until incorporated, but don’t over mix, and spread the batter in your baking dish.  This is a thick batter and will need to be smoothed out with a spatula.

Bake the brownies for 20-25 minutes or until a skewer or toothpick placed in the center of the brownie shows no gooey batter.  My brownies took 25 minutes.

While the brownies bake, make the frosting by whipping all of the ingredients up in a mixing bowl.  I recommend sifting the powdered sugar to avoid sugar lumps.

Once the brownies come out of the oven, allow them to cool for about 10 minutes and then spread the frosting over the top using an offset spatula.

Allow the brownies to cool and the icing to form the hardened fudge surface before serving.  I like these brownies cold, but my husband prefers them room temperature.  To each their own.  Happy baking!