Skillet Chicken Pot Pie and Biscuits – Life Above the Cafe 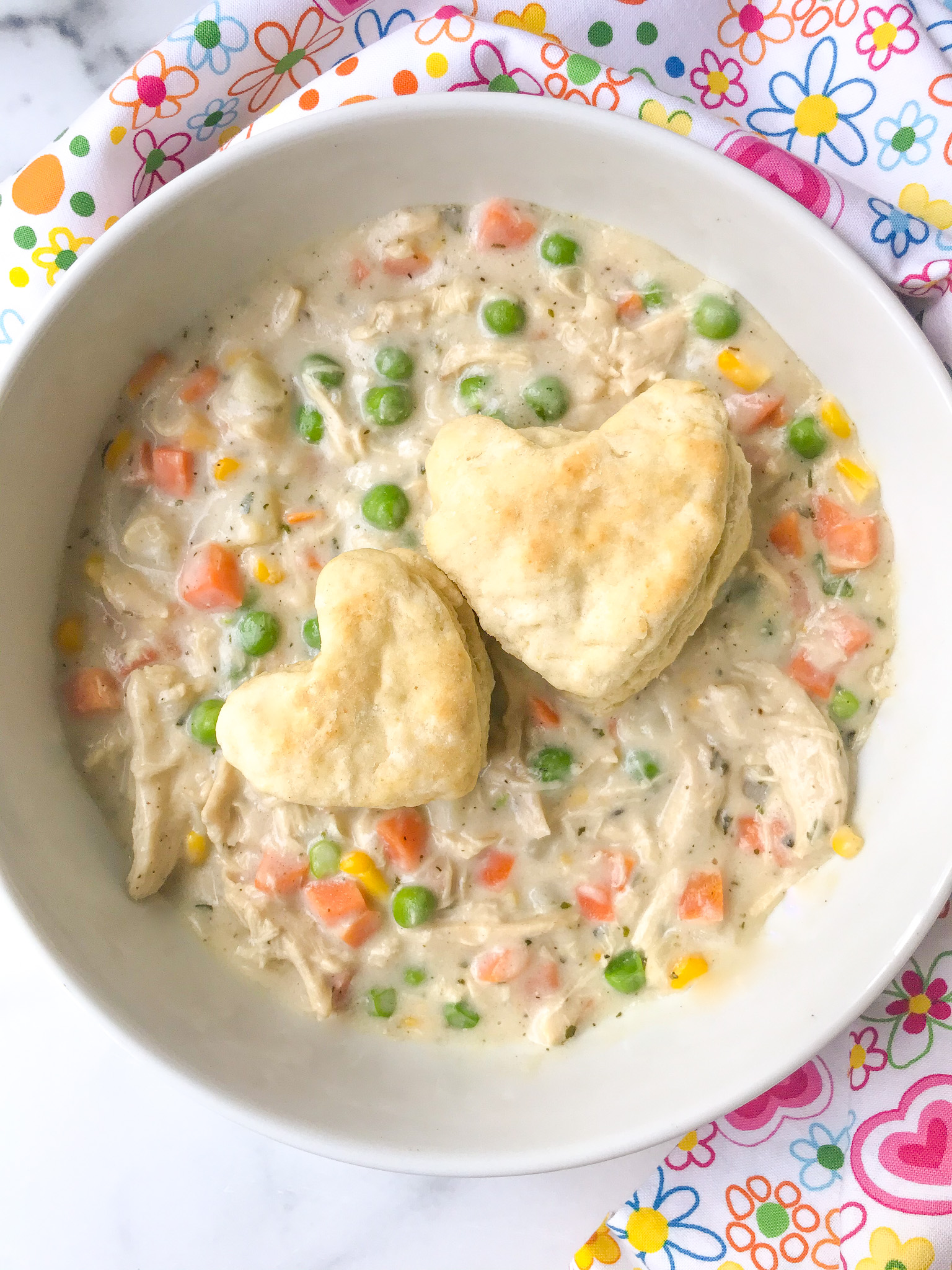 My parents both worked full time, so once I was old enough to become the babysitter of my younger brother, we were left home alone during summer vacation. I wasn’t allowed to use the stove or the oven to make lunch for us since I would’ve definitely burned down the house at the ripe old age of 9. Yes, you read that right, and nowadays my parents would be in jail for leaving a 9 year old in charge of herself and a 5 year old, but it was the 80’s and as I’ve said before kids were raised by wolves (themselves) during the 80’s.

The chicken pot pies were so salty, but back in the good old days, I wasn’t worried about clogging my arteries or good verses bad cholesterol. Now though, I’m recreating childhood favorites that are way less processed, and less apt to make the vein in my neck start jumping after I eat because I’ve sent a week’s worth of salt coursing through it in one sitting.

I start my biscuits first so that by the time the skillet chicken pot pie is finished, so are the biscuits. I also use previously cooked chicken breasts, like my slow cooker chicken breasts, and frozen mixed vegetables to make this recipe even faster. I don’t use cream of anything soup (chicken/mushroom/celery) for this sauce, but if you want an even faster meal, use it with an equal amount of milk, and a can of chicken broth instead of making my sauce. I would still season the cream of soup mixture with dried parsley, garlic powder, onion flakes, and pepper, but taste it for salt since it may not need any extra.

If I have leftovers, I store the biscuits in a container on the counter and put the skillet chicken pot pie in a bowl in the refrigerator. I like to reheat the biscuits in the oven, wrapped in foil, so that they’re as fresh as they were on day one, but wrapping them in a damp paper towel and microwaving them for 10-20 seconds works too.

This base for the Chicken Pot Pie is also great with a pie crust place on top and baked in the oven. I have bought refrigerated pie crusts and made them from scratch and both taste delicious. It’s sure to be a hit with your family and way better for you than a frozen pot pie with 2,000 milligrams of sodium in it.

Cook the biscuits according to directions. My recipe link for homemade biscuits is above.

While the biscuits cook, make the sauce in a large nonstick skillet. Over medium high heat melt the butter and whisk in the flour. Cook the two together for about 2 minutes, stirring constantly to prevent burning.  Slowly whisk in 2 cups of chicken broth so that no lumps form in the sauce.

Add the salt, pepper, parsley flakes, garlic powder, dried onions, and other optional spices. Continue to cook until the sauce thickens.  The sauce may start to boil, turn down the heat to maintain a simmer once it thickens.

Next, add 1 small bag of frozen mixed vegetables or 1/2 of a large 32 oz. bag. Cook the vegetables for about 3-4 minutes until they are warmed up and then add the chicken and cook it for 1-2 minutes. At this point turn down the heat to medium low and add the heavy cream or other milk product. I would start with 1/2 of a cup and add more as needed to thin the sauce.

Continue to cook everything together for a few minutes until warmed through, stirring occasionally to avoid burning the sauce to the bottom of the pan.  If the sauce thickens up too much add a little more broth or milk to thin it to your desired consistency.

If you can’t have dairy then use more chicken broth in place of the dairy.

Taste and adjust the seasonings as needed. Serve this skillet pot pie in a bowl topped with biscuits. Reheat leftovers in the skillet or in the microwave. You may need to add a little water the second day since the sauce will thicken since it has flour in it.

Notes** For extra flavor, I often start my sauce off by adding 1/4 cup of diced onions and 6 chopped button mushrooms to the butter. I sautee the onions and mushrooms for 3-4 minutes and then add the flour and finish cooking as directed above.

Corn starch can be used as a thickener in place of the flour if you are avoiding flour.  Mix 2 to 3 tablespoons of cornstarch with the broth and then add it to the pan.  It will need to boil in order to thicken correctly.  Turn it down to a simmer once it thickens.