Steak Fajitas – Life Above the Cafe 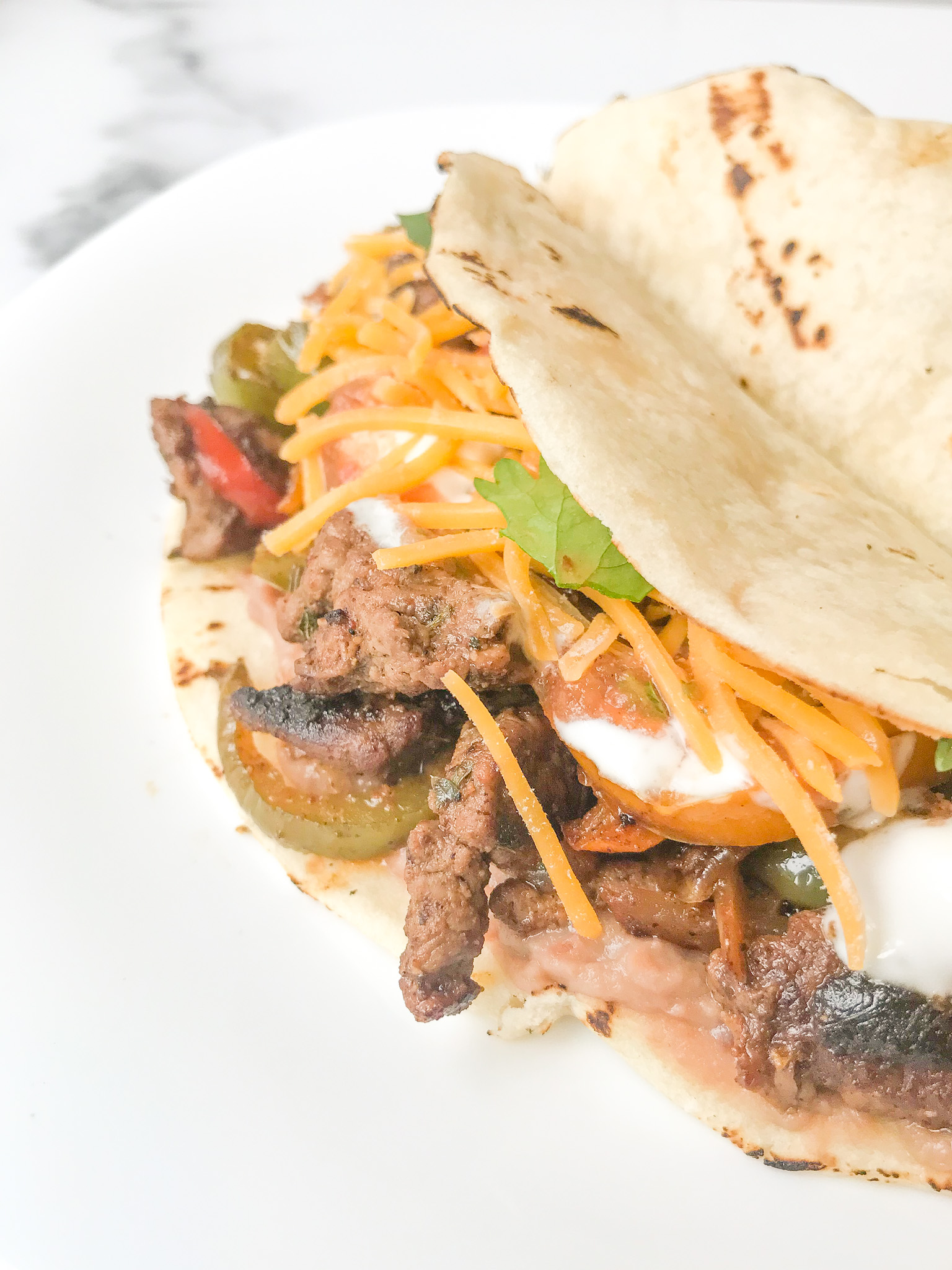 If you’re eating a low carb diet this meal is perfect. Rather than piling the toppings onto a tortilla, make a salad and top it with these amazing Steak Fajitas.

For this recipe I used a cut of meat that’s a sirloin roast called Picanha. It’s popular in Brazil and Portugal. In the US most stores sell sirloin like this cut as sirloin cap, or sirloin rump. It was a thicker piece of meat and took a while for me to cut into the small pieces, but it was so worth the extra effort. My husband declared that it was the best meat he’s ever had, and I have to agree. It was gifted to me by a friend who knows how much that I love to cook.

I sliced the steak into thin pieces against the grain so the pieces would be easy to chew (by the way they were like butter) and so that they would cook quickly. By slicing the meat thinly, every surface has a chance to capture all of the seasonings and caramelize, which leads to more flavor.

Remember not to cross contaminate. Use one cutting board for dicing up raw meat, and a separate one for cutting up your veggies. Wash your hands well and wipe down all surfaces with a disinfectant after cutting the raw meat. Better safe than sorry.

In my opinion, the peppers and onions should also be cut thinly, and cooked for a while too. I always chop a pile of peppers and onions up since they shrink down so much and they’re so tasty. The tricolor three pack of assorted bell peppers is perfect for this recipe and is usually cheaper than purchasing individual peppers. I cook them separately from my steak so they don’t steam and I cook them until they start to form brown (not burnt) edges since it adds intense flavor. I’m not about almost raw crunchy fajita veggies, but to each their own.

Don’t add too much salt because the secret to great Steak Fajitas is a tiny bit of Soy Sauce, which has plenty of salt, at the end of the cooking process. Keep that in mind when seasoning if you plan to finish the Steak Fajitas off with soy sauce. I would taste them after the addition of soy and then add more salt if you think that the Steak Fajitas need a little extra salt.

I know that these Steak Fajitas require a little prep work, but they’re totally worth it and the leftovers (if there are any), make amazing quesadillas the next day!! Don’t forget to top them with my fresh homemade salsa!

This feeds a family of 4 and we usually have leftovers, adjust as you see fit for your family.

On a separate cutting board cut the sirloin into long thin strips against the grain of the meat.  My slices are about as big as the pepper slices.

I don’t measure the spices mentioned above, I sprinkle each over the peppers and onions as they cook and then over the meat as it cooks.  I save the fresh garlic for the end, but if I’m using garlic powder I add it to the vegetables and then to the meat.

After removing the meat, add 1 Tbsp. of oil, heat it and then add the steak pieces. Do not overcrowd the pan, you want the meat to have plenty of space to brown.  Cook the meat in two batches if you don’t have a large pan. While the steak cooks season it with the same spices that were used to season the vegetables. Stir the steak often, it will cook quickly.  You want it to brown a little on the outside but not dried out or tough inside.  Normally the steak is cooked in 3 to 4 minutes.

Once the outside of the steak starts to brown, then add the peppers/onion mixture back to the pan of steak and add the fresh minced garlic. Cook for a minute and then add 1 Tbsp. of soy sauce to the pan. Taste the fajita mixture and adjust the seasoning as needed and add more salt if you like a saltier dish.

Serve the fajitas on warmed tortillas. I like to warm my tortillas in a hot skillet or over the gas flame on our stove top. Costco and Walmart sell large, fresh tortillas that are found in the refrigerated section. They need to be cooked on both sides in a pan, but they are like homemade tortillas.

We fill our fajitas with a little scoop of each of the following, the fajita mixture, refried beans, shredded lettuce and cheese, my homemade salsa, sour cream, guacamole, and rice, but make your fajitas how you prefer.