Chicken Tamales – Life Above the Cafe

A little masa filled gift wrapped up and delivered in a corn husk! 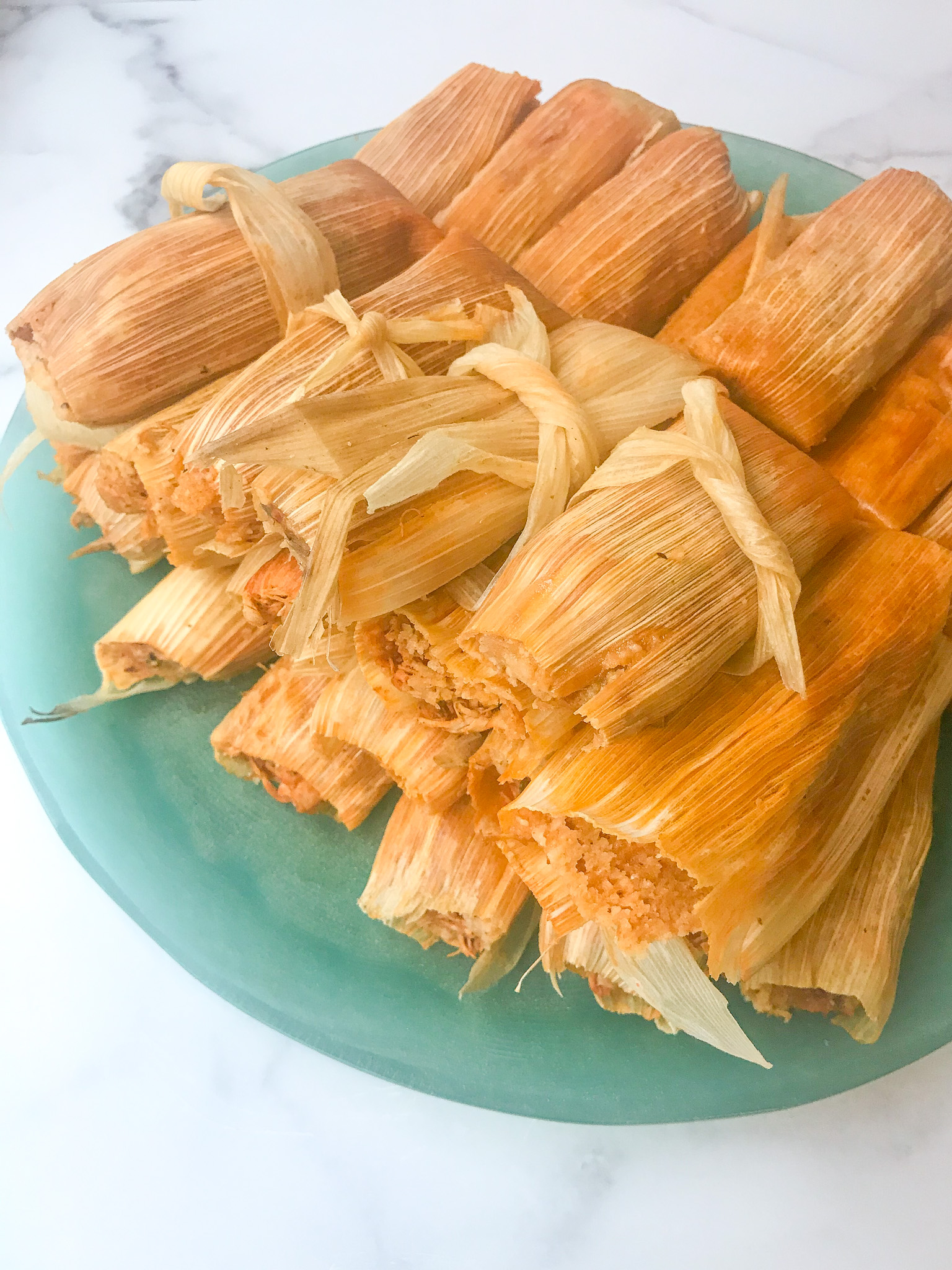 This is a recipe that I learned through marriage. My husband’s large family makes tamales by the dozens. My father in law taught all of his kids to make tamales and from the time that they were old enough to help out, they had a spoon in one hand and the corn husk in the other and were at the kitchen table spreading the masa dough. We’ve continued on with the tamale making in our own household. We always make them for Christmas, but we love tamales so much that we make them a few other times throughout the year when we are craving them.

In our family, tamales are made using corn husks and they aren’t too big so that you can’t pick them up with your hands. My husband’s family has always made a tamale that can be eaten in a few bites, but in some of our friends’ Latin families they use banana leafs and the tamales are large and definitely aren’t hand held food.

This recipe is easily adapted to your liking. We made about 40 (3 bite) tamales with these ingredients. I’m not one that loves my food extremely spicy, but I do enjoy a little spiciness so we’ve adapted our recipe by using less of the spicy peppers that my father in law used. Also, the filling for the tamales isn’t a standard filling. I save beef or pork roast in my freezer if we have extra and use it or I make a whole chicken in my slow cooker and shred it to use. The last time we made the tamales I made a few with leftover Fiesta Potatoes and the leftover Vegetarian Lentil Meat from my Vegetarian Taco Sweet Potatoes. The lentil filled tamales turned out to be my favorite and I will definitely try out other vegetable fillings in the future.

Every family has its own methods and seasonings for tamales. This is our family’s way of making them and throughout the years my husband and I continue to adapt our recipe a little too. If you’ve never seen the process, then I recommend watching a few videos on YouTube to get a fill for what it’s all about. I also have added video on my Instagram account of me making tamales. Over the years I’ve watched lots of different videos even though I’ve seen the family method first hand, I feel like there’s always something to learn in life from others.

These tamales are steamed for an hour, and cooked a little longer (30 extra minutes) if they need it. At the hour mark, I always take a tamale out of the pot, let it cool, and then we try it out to see if it’s cooked through. In our family we like them soft, but not falling apart. Don’t over cook them. If they peel away from the corn husk easily they’re ready. I like to warm up the leftovers in a steamer basket too, but the microwave works well.

Helpful hints for a great tamale experience: Be ready to get a little messy, have extra help so that it goes faster, make the meat and pepper sauce the day before, the masa should be spreadable and a consistency similar to thick peanut butter or grout for tile, make sure the water doesn’t touch the tamales in the steamer and that the water doesn’t run out, steam the tamales for an hour and then remove a tamale to cool and eat it to check to see if they’re all ready to come out of the pot.

For the Chicken Filling:

For the Chili Sauce:

For the Masa Dough:

The morning of, sort through the corn husks and throw away any that have mold spots.  Soak the corn husks in a large bowl or pot of warm water or a clean sink, for one hour.  Remove the corn husks after one hour and allow to dry.  Tear any large corn husks in half since they should be about as wide as a man’s palm.  Save the extra corn husks that aren’t filled to cover the tamales in the pot before they are steamed.

For the Chili Sauce:

Cook the peppers in a pot of boiling water (at a low boil) until they are soft (about 20 minutes).  I didn’t use the Chiles de Arbol this time because I wanted our tamales milder, but normally we add them.  Other peppers that are often used are Ancho chilis so if you can’t find the Guajillo chilis substitute them.  Drain the peppers, carefully remove the stems, dump out the seeds, and then blend them up with a of the cooking liquid from the pot or the chicken broth.   Pour the pepper mixture through a metal sieve to remove all of the skin and seeds that remain.  I add a little chicken broth if I feel like the chili sauce is too thick.

In a large skillet over medium high heat, add 1 Tbsp. of oil and saute the diced onions until they’re translucent.  Add 1 more Tbsp. of oil and the shredded chicken and season it with the 1/2 tsp. of salt, 1/4 tsp. of pepper, 1 tsp. of garlic powder, 1 tsp. of cumin, 1 tsp. of dried parsley and 1/2 tsp. of dried cilantro and oregano.  Taste and add more salt if necessary.  Pour 1/2 cup of the chili sauce over the chicken and stir.  Add more sauce until the desired color is reached.  Add 1/4 – 1/2 cup of chicken broth to make a sauce.  It should be similar to thick bbq sauce not runny.  If the chicken mixture is too wet, cook it for a few minutes until it thickens.

For the Masa Dough:

In a stand mixer, or in a large bowl, whip the shortening until it’s light and fluffy over medium speed.  In a separate bowl, mix the baking powder, salt, garlic powder, cumin, and chili powder with the Maseca.  Add the 3 cups of Maseca in with the shortening, and mix thoroughly until it resembles wet sand.  Add 1 cup of the chicken broth and mix and then the chili sauce and mix well.  At this point I taste the dough to see if it needs more seasoning and check the consistency.  Add more broth, a little at a time, until the consistency of spreadable thick peanut butter (or grout for tile) is reached.  Do not add too much liquid or the dough will be too damp and not spread or cook well.

Place the tamales in a large pot of water that has a steamer basket in it and is filled with water to the bottom of the basket.  I place foil rolled up in balls, in the bottom of the pot then put my steamer basket on the foil to allow me to add more water.  The tamales shouldn’t be soaking in the water during the steaming process.  I stand the tamales up with the open side at the top and then I cover the entire surface with the extra corn husks and cover the pot with the lid.  Bring the water up to a boil and then turn down the temperature so that it stays at a low boil in order to steam the tamales.  Steam the tamales for one hour (don’t allow the water to run out), and then remove one, let it to cool, and test it for doneness.  When cooled, the tamale should easily unroll from the corn husk and the masa shouldn’t taste raw.  Don’t overcook the tamales.  If necessary steam them for another 15 – 30 minutes.

I like to warm the leftovers up by steaming them again, but the microwave works well too.  Refrigerate all leftovers.  You may not need all of the corn husks, but we don’t save them for future use.