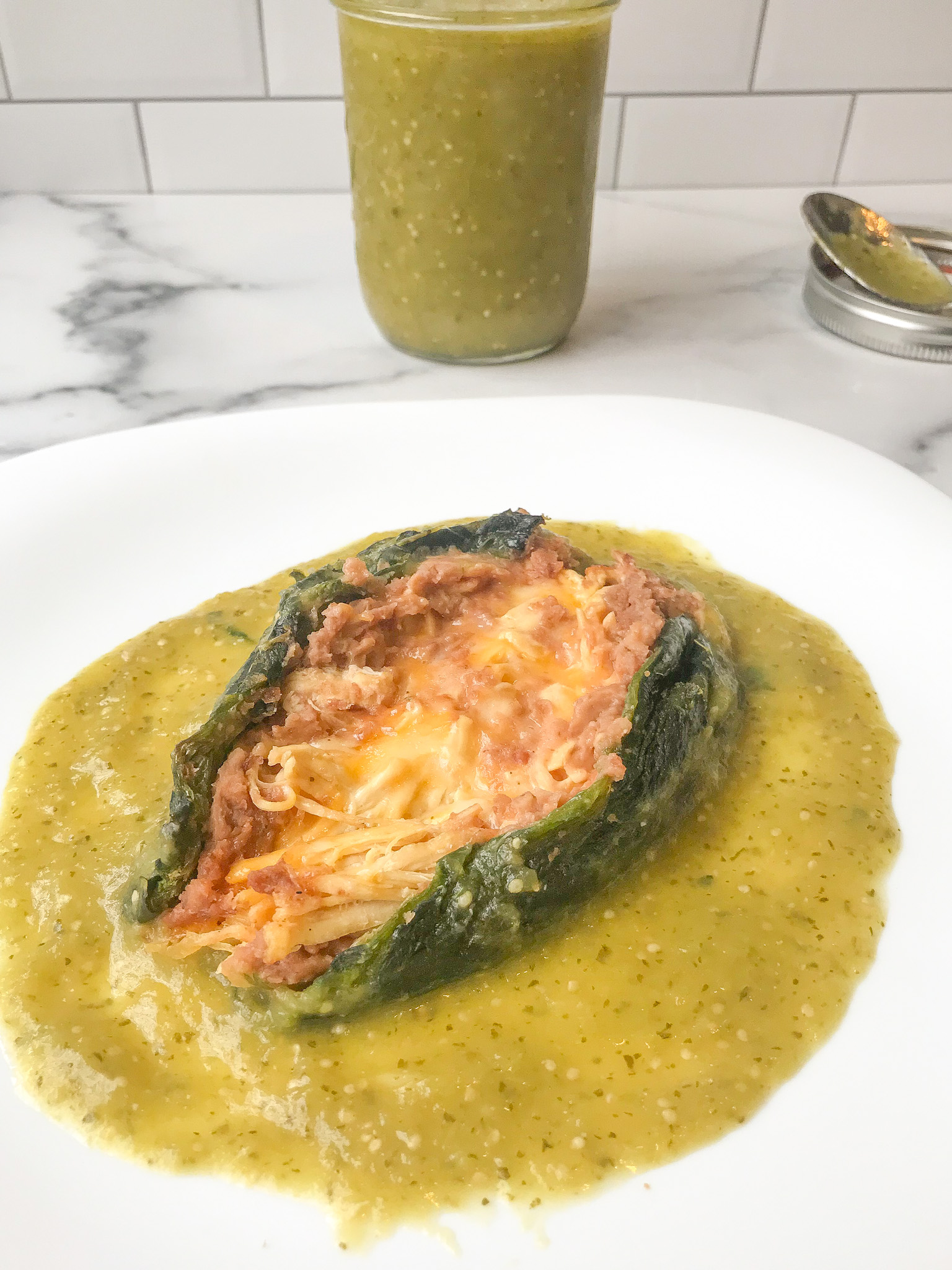 In an effort to add low carb recipes to my monthly meal plan, I came up with these Salsa Verde Poblano Burritos. They are reminiscent of a burrito because I used our normal burrito filling as the stuffing rather than just cheese which poblanos are often stuffed with for Chili Rellenos.

To save on the calories I didn’t batter and fry the stuffed peppers. Instead, I baked them after they were stuffed full in order for the flavors to come together and for the cheese to melt.

We love all types of Mexican food and the assorted sauces that are served on top of the various dishes, but Salsa Verde has quickly become my favorite sauce. I’m a big fan of the combination of tomatillos, onions, jalapeno, and fresh cilantro. If you can’t find fresh tomatillos, canned will work well too.

If you prefer Salsa Roja (Red Sauce) check out this recipe for a different version of my Chicken Stuffed Poblano Peppers. I would still use the same steps listed for stuffing the peppers with shredded chicken, refried beans, and cheese, but prepare the red sauce in the link instead of the green sauce.

I served these peppers alongside my family’s favorite, Cilanto Lime Rice therefore I only prepared one pepper per person. They were large peppers though and thoroughly filled to the brim. If you would like to leave out the carbs substitute the rice for Riced Cauliflower that is cooked and topped with chopped cilantro and fresh lime juice.

Preheat your oven to 375 degrees Fahrenheit.  Spray a casserole dish or cookie sheet with cooking spray.  I cut my peppers so that they would lay completely flat and would be easier to fill and roll up.

Lay the peppers with the interior facing up.  Spread a layer of refried beans across the entire surface of the inside of the pepper add a generous scoop of shredded chicken and then sprinkle the surface with shredded cheese.  I used a mixture of cheddar and monterrey jack since they melt well and have a great flavor, but use your favorite melting cheese.  Roll the peppers back up so that the seam is closed and place them in the greased pan.

Once all of the peppers are filled, bake them for 20 – 25 minutes or until everything is warmed through and the cheese is melted.  I served the peppers with my Salsa Verde and sour cream.